Once again this week Enigma Troop split and those that visited Think Forensic last week had their turn to learn all about Air Rifles and shoot one thanks to Range Master Steve giving up his birthday to educate and instruct the Scouts. 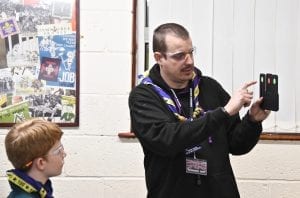 As the night progressed the Scouts soon got the hang of it and some impressive scores began to emerge, some even managed to get multiple 10pt shots!  Meanwhile, the rest of the Troop were again battling crime and honing their investigative powers.  You will be pleased to know that Papa Echo 1 & Papa Echo 2 not only locates the stolen trophies but apprehended the suspect trying to flee the country at Calais!  Enigma Troop would like to extend special thanks to Nicola Duffey and Sharon Slater for giving up their Monday evenings to help at Think Forensic.  Also special thanks to Rob and Amy in assisting Steve at the scout hut with the Rifle Shooting.

One thought on “Enigma does even more Rifles and CSI”