There were several members of the group at the Barnsley District Awards evening receiving their top awards this week:

A record of 15 Scorpion Explorers achieved their Chief Scouts Platinum awards and several of the same were also presented with their Duke of Edinburgh Bronze awards.

Well done to everyone!

The week ahead is the half term, so there won’t be any section meetings.

We hope you all have fun over Halloween and look forward to seeing as many of you as possible at the Penistone Bonfire Night (details below). 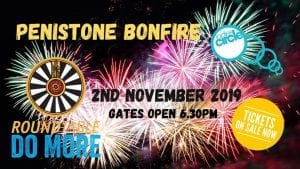 If you book in advance, you can get your tickets cheaper than on the gate.

Castors, Boomers and Millstones enjoyed a navigation walk this week. For an end of term treat, we finished at the chip shop. We also invested our new Castor members. Well done everyone!

Bella Vista had lots of fun this Thursday. We carried on our focus on healthy eating by making fruit kebabs to eat and fruit salad to take home.

Alegre had a great time crafting pom-pom spiders and pumpkins for Halloween. There were some amazing and careful spooky creations!

Raptors swapped nights this week so that the session could still run. We had a creative evening making plastic poppies for the forthcoming armistice event. We also made our entry for the Penistone Bonfire Round Table guy competition – so fingers crossed for that! To finish off, we enjoyed one of our favourite games, Dodgeball – with a new adaption that we’re hoping to try again soon…

Enigma and Viernes had a joint meeting this week. We carved some fantastic pumpkin creations and got in the mood for Halloween!

Wibbles scouts had a late change of plan due to clashes with some school commitments. Instead, Patrol leaders ran the meeting and created a series of games and challenges which all contributed towards their team leader badges.

Explorers took part in a very animated debate evening talking all things ‘ Brexit’. The final votes echoed the current views in the UK as some Explorers switched votes. The evening was finished off with two teams delivering their Duke of Edinburgh Silver award presentations, which completed their expedition sections.

Look out for Fast Forward next weekend with meeting details for the week starting 4th October.